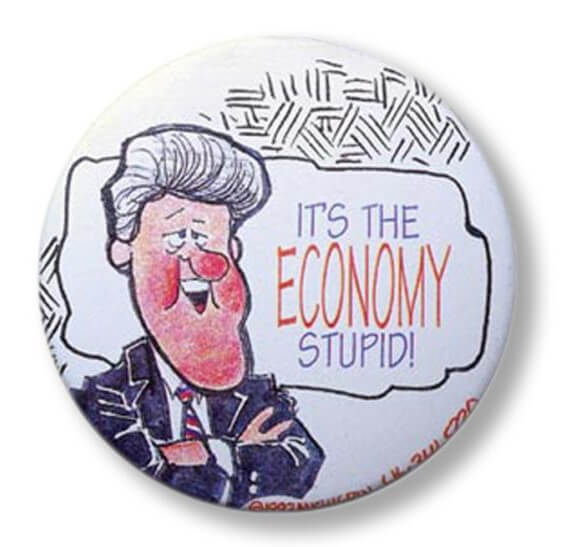 “It’s the economy, stupid”, a phrase used by Clinton to win the US presidency in 1992, was turned on its head in a 2020 cartoon depicting Swedish activist Greta Thunberg scratching out the word “economy” and replacing it with “planet”. As business owners in the 2020’s, our challenge is dependent on how to courageously follow both of these witticisms. Consumers are way ahead of business, which soon will be regulated, by law, to be environmentally friendly. The time to get ahead of the curve is now. Our survival depends on it.

Cutting carbon is cheap and easy, so why stop there? Why not monetize it, by marketing your environmental hero status to drive revenue, and influence consumers to follow your lead? Patagonia did it and so can you. Given so few businesses are taking action on climate, there is a window of opportunity, right now, to stand out. There is still time to be an early adopter on the climate front, given how laggard the business community has been in adopting climate friendly business practices. Why not drive revenue by telling the world how great you are, and change some hearts and minds in the process? Recent data shows a rapidly growing proportion of citizens use social and environmental “responsibility filters” to guide their consumer decision making.

BUT, is it a moral quandary to monetize the climate crisis? Its sure as heck is. But the devil is in the details. If you are telling the world, through your marketing and communications, that you are proud of yourself because of the actions you have taken to protect Mother Earth, nobody will quarrel. If in turn, consumers and clients flock to you to spend their hard-earned dough, because of your Climate Earth actions, similarly, nobody will quarrel. If you are telling the world that your actions demonstrate your commitment to humanity, nature and the planet, and that they should follow suit, because its way easier than you thought, then you deserve nothing but praise. Given the power of business to influence consumer decision making, in this case by encouraging citizens to join you in the fight to save Earth, why aren’t more businesses jumping on board the climate marketing wagon?

Because up until recently, it didn’t work, unless you were hard core, like Patagonia. But these days, environmentally savvy consumers are increasing in numbers, exponentially. Satisfying their discriminating tastes isn’t as hard as it used to be. Just ask a stranger on the street if they would preferentially buy from a business that models environmental and social responsibility. Data shows that over 80% of citizens, when asked this very question, unequivocally say, YES, as long as prices remain as low as possible. Being climate friendly is cheap, so there is no need to increase prices.

Consumer savvy has changed a lot in the past few years. They expect a lot from business. That’s a big change from a few years ago. You no-longer have to be hardcore like Patagonia, which has been using environmental marketing, and anti-marketing, to drive revenue for decades. Their climate and environmentally friendly initiatives have inspired millions of citizens around the world to follow suit. As a result, I believe that Patagonia, and their millions of followers, are responsible for cutting more carbon and greenhouse gas, than all other businesses, combined. You could be next.

If you follow my advice, and cut your carbon 25% (a commonly used threshold), you too can market your eco hero status, and drive revenue. If all businesses in Canada and the US cut carbon by 25%, and citizens followed suit, we would achieve our national climate targets and give Earth some breathing room. This is what it will take. Its time for business to jump on board, and proudly own their eco responsibility. If you do it now before the masses jump on board, it will also drive revenue and help your business be resilient.

Data shows, if you communicate your eco story to your clients and customers, in a meaningful and thoughtful way, you will get heaps of praise. You’ll also be protecting your business against future uncertainty. Sadly, the future of business is increasingly uncertain, and more crises like CO19 are coming our way. You can bet that when push comes to shove, when things get tight, ethics and morals in business count, a lot. This was clearly demonstrated with CO19. Businesses that stepped up to the plate and proudly declared to the world that they took some kind of meaningful action to fight the virus, like the breweries and distilleries that produced sanitizer, or brick and mortars that supported front line workers, were handsomely rewarded for their action. And so will you when you become the next climate hero.

← When protecting the climate and planet becomes law